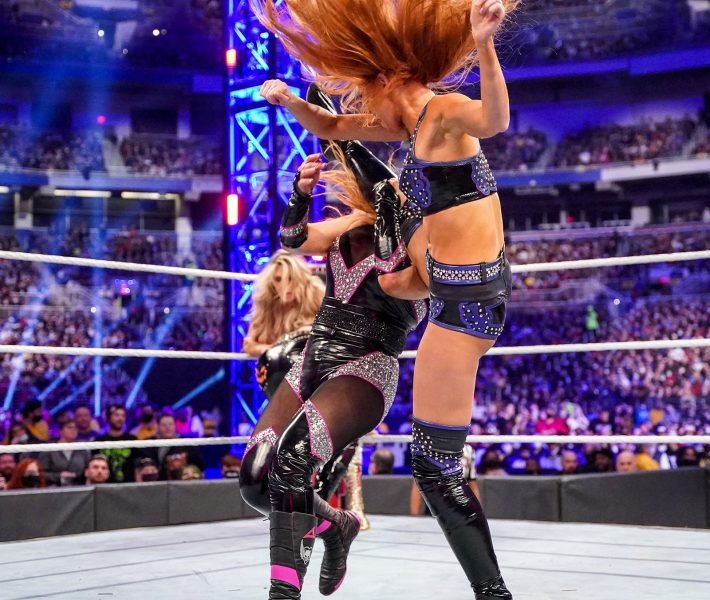 We go back to ringside and Jimmy Smith is with Corey Graves and Byron Saxton. There’s still debris all over the ringside area due to what happened in the opener. Mike Rome does the introductions and out first is Sasha Banks to a pop. Out next comes former WWE Women’s Champion Melina making her return, red carpet entrance and all.

Banks and Melina have some words and taunt each other in the middle of the ring. Melina kicks but Banks catches it and kicks her in the face. Banks grabs Melina and easily tosses her over the top rope for a pop. Melina has been eliminated. Banks drops a split and mocks Melina some more, while Melina also does a split on the floor at ringside. Tamina Snuka is out next.

Banks attacks Tamina from the apron as she approaches the ring, then nails a Meteora from the apron to the floor. Banks brings Tamina into the ring and tries to dump her over the top rope but Tamina pounds on her and saves herself. Banks catches Tamina in a big Bulldog off a counter. Tamina is down in the corner when Banks nails the running knees, and then for a second time. Banks works on dumping Tamina again but she hangs on. Tamina levels Banks with a headbutt. The music hits and out comes former WWE Divas Champion Kelly Kelly next.

Banks gets sent to the apron but she hangs on. Kelly enters and goes at it with Tamina, nailing her handspring back elbow into the corner. Tamina comes out of the corner and flattens Kelly while Banks watches from the corner. Banks attacks Tamina while she works on Kelly. Banks and Kelly tangle and Banks eliminates Kelly. Kelly has been eliminated and Banks laughs at her. Aliyah is out next.

Banks and Aliyah go at it now. Aliyah with a Thesz Press and big right hands. Tamina stops Aliyah’s celebration and they go at it but Aliyah nails an enziguri. Banks tries to dump Aliyah over the top rope now. Aliyah fights back but Banks drops her with a knee. The timer starts up and the next entrant is Liv Morgan. She rushes the ring and starts fighting. Banks and Morgan tangle now. Liv almost kicks Banks out of the ring but Banks hangs on. Tamina saves Banks and sends Morgan to the corner. Morgan with a missile dropkick to Tamina. Banks goes back to work on Aliyah but Morgan saves her. Liv drops Banks and Aliyah in the corner and points at the WrestleMania 38 sign. All four are fighting in the corner now. Banks with the three suplexes to Aliyah to pay tribute to WWE Hall of Famer Eddie Guerrero. The music hits and out next comes WWE Women’s Tag Team Champion Queen Zelina Vega.